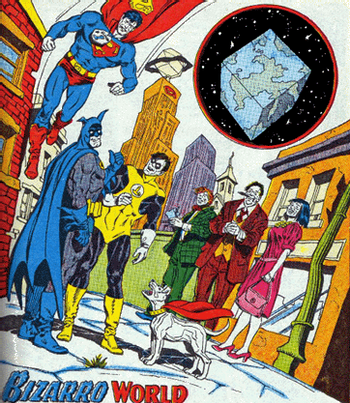 It am awful place to visit, but me love to live here.
"Inverted world, where the spazzes make fun of the cool guys!"
— Tom Servo, Mystery Science Theater 3000 (Laserblast)
Advertisement:

An Alternate Universe where everything is the same... but different. The Superman comics originated this, and it has been parodied by a number of shows.

A bizarro world is distinct from a normal Alternate Universe in that a bizarro world has everything "reversed" in some way. Heroes are villains and vice versa; beauty is hated and ugliness embraced. A good/evil flip is the usual trope, common enough to be its own subtrope: Mirror Universe.

Recent examples of bizarro universes have reduced the use of good and evil in favor of other reversals, such as who is the 'smart one' in a group of friends or who are the 'cool kids' at school.

A bizarro universe need not be a literal "other universe"; sometimes it is simply another city/country/planet or a counterpart organisation that has strangely familiar elements, but with some sort of reversals present.

Occasionally, a bizarro world will have inverted language (eg: "badbye" instead of "goodbye"). This is usually not done, however, since the rules are very hard to follow and are often changed.

Compare Opposite Day, a similar idea on a much smaller scale.