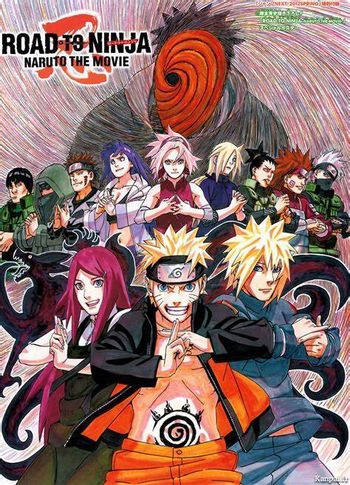 "My name is Uzumaki Naruto. My sensei told me that a shinobi is one who endures."
Advertisement:

Naruto Road To Ninja is the ninth film in the Naruto franchise and the sixth film of the Shippuden series. Like all of the previous films in the Naruto franchise, this film is non-canon. The film was made in lieu of Naruto's 10th Year Anniversary (of the anime, rather than the manga) and as such, series creator, Masashi Kishimoto, was involved with the story planning and character designs.

After a odd bout against members of the Akatsuki (including a few that have been killed), Naruto and Sakura reflect on their lives and wonder if things would've turned out differently if their roles were reversed. They get their wish when Madara (aka Tobi) suddenly appears and seemingly transports them into an alternate world where their friends personalities are different (Rock Lee and Neji are perverts, Kiba is more of a cat person, Hinata is more assertive and brash, Ino is a Shrinking Violet, etc), Sasuke never defected and is still around (if not a bit of a playboy now), and perhaps more shockingly Naruto's parents are still alive while Sakura's were the ones who died saving the village and became the hometown heroes. As the two try to figure out what's going on and if they can get back to their world, Madara conspires with a masked ninja to kill Naruto and gain the Nine Tailed Fox from him.