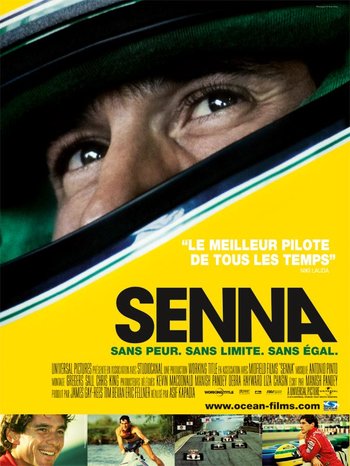 Senna is a 2010 film directed by Asif Kapadia.

(1960-1994). More specifically, it is a documentary about the racing career of Ayrton Senna. There is a brief aside about how he came from a wealthy Brazilian family, there is another brief aside about his charitable work helping poor Brazilian children, and there are a couple of short clips of Senna with girlfriends. Otherwise there is nothing about his personal life.

Instead the film covers his Formula One career, starting with his big splash at the Monaco Grand Prix in 1984, when he seemed to be on the verge of winning when the race was stopped on account of rain. Senna joins the McLaren team in 1988 and becomes teammates with Formula One world champion Alain Prost. The two soon become fierce rivals, with Senna winning the championship in 1988, Prost taking it back in 1989 after Senna is controversially disqualified at the Japanese Grand Prix, and Senna winning again in 1990 and 1991. Senna joins the Williams team in 1994 and expresses concern about the handling and mechanical characteristics of his Williams car, comments which foreshadow his tragic death when he drives into a wall at the San Marino Grand Prix, on May 1, 1994.