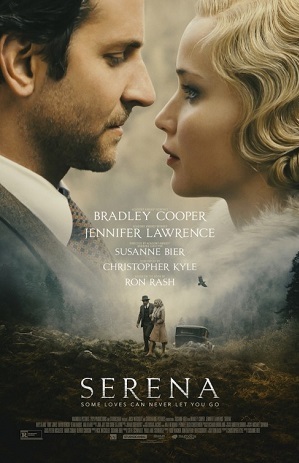 Directed by Danish director Susanne Bier, Serena is a 2014 Period Piece drama based on Ron Rash's novel of the same name. Set in the Smoky Mountains during The Great Depression, it is about George Pemberton (played by Bradley Cooper), a timber company owner who meets a mysterious blonde woman, Serena (Jennifer Lawrence). They marry and she comes with him to live at the site of his company, where she quickly joins him in taking charge of the work. While George deals with plans by the government to turn the woods into a national park, Serena becomes pregnant with his child. Then things go downhill fast...
Advertisement:

Has nothing to do with the freeware adventure game of the same name. Don't confuse it with the 1997 biopic Selena either.