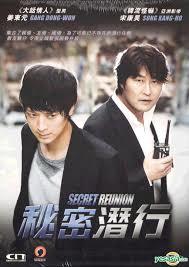 After failing to catch a North Korean assassin known as "The Shadow", NIS agent Lee Han-gyoo (Song) is fired, and starts a new life as a Bounty Hunter locating runaway mail-order brides. While investigating, Han-gyoo runs into one of the Shadow's former agents, Song Ji-won (Kang). They immediately recognise each other but they keep each other's identities a secret, and Han-gyoo offers work to Ji-won as his partner. Ji-won doesn't know that Han-gyoo was fired, and Han-gyoo doesn't know that Ji-won doesn't work for the Shadow anymore, and while they try to report each other they become close friends, which causes old tensions to resurface.