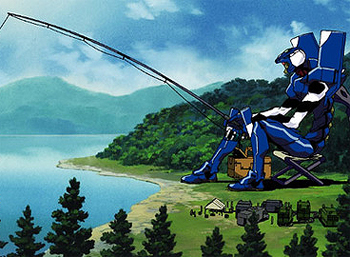 What's the bag limit on Gaghiels?
"Ahhh...that's it! A little sonar-wave pulse through the waters should attract the big fish. Science, you win again!"
— Iron Man, Marvel Adventures: Avengers
Advertisement:

They go fishing, of course. "Fishing" being a general euphemism for things like chillin' out, maxin', relaxin' all cool and all, shootin' some b-ball outside of the school. Obviously, the story probably won't just be about them enjoying some downtime - there's no drama in that, so trouble is likely to follow them, although they might get a Beach Episode or a Breather Episode.

If on vacation, this can be related to a Busman's Holiday. Often featured in a Fishing Episode. In video games, this is very often shown in Wide-Open Sandbox and Role-Playing Game genres, but other genres don't lack in this trope either.

Cole and Zeke spend an afternoon without fighting Militia and forced conduits and the end of the world.

Cole and Zeke spend an afternoon without fighting Militia and forced conduits and the end of the world.