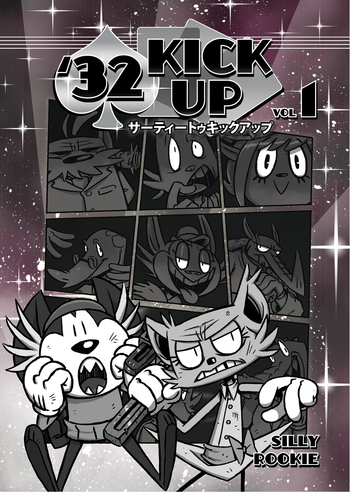 In 1930's Chicago, two naive kids, through a mix of bad luck and even worse decisions, join forces with a vigilante to take on the mob. In their adventure, they learn about themselves and the world around them, and they might not like some of the things they learn.
— Silly Rookie
Advertisement:

Running since 2016, '32 Kick-Up is a Fighting Series set in Chicago during The Great Depression in a world of Inkblot Cartoon Style Funny Animals who live alongside humans.

Centered on two kids, the arrogant Patricia-Marie and her best friend Calloway, who end up fighting mobsters to rescue Calloway's older cousin with the help of a vigilante who Patty idolizes. Clearly inspired by Shōnen series, to the point that it has speed lines and Japanese sound effects.

Updates sporadically. Can be read here

Chapters of this series provide examples of: