The Family for the Whole Family 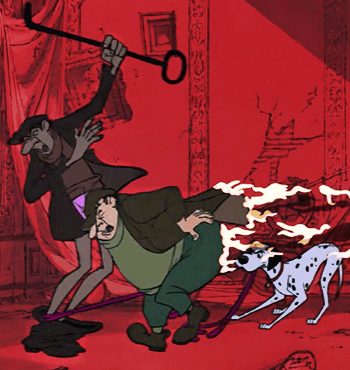 Jasper and Horace were this close to crossing the Moral Event Horizon. Then they got a little hot under the collar.
"Then I drive him out to the woods. Badda bing badda bang. Three in back of the head, that's the end of Little Paulie. So what do you think Frankie says when I report back in? 'Little Paulie? Nah, I told you to pop Big Paulie!' That's the problem with our business, too many guys named Paulie."
— Cicci, Star Trek: Deep Space Nine, "Badda-Bing, Badda-Bang"
Advertisement:

What do you do when you need some big, tough guys to menace the heroes, but don't want to risk having them actually, you know, hurt anybody? You call in The Family for the Whole Family. They're not the scary, competent, make-it-look-like-an-accident mobsters seen in Mafia movies; they're the harmless, ineffectual, and very, very stupid mobsters that are a staple of family-oriented comedies. No matter how many of them are in their group, you can be sure of two things: there will only be one shared gun among them (if they thought to pack any weapons at all), and they'll always forget that there's a trigger on it when they want to threaten someone, rarely having any Plan B in case pointing it really hard at them doesn't work.

Despite the name, this brand of goon doesn't necessarily have to be a member of The Mafia. They can be from any group who is normally considered dangerous by definition (i.e. gangsters, thieves, spies, hitmen, Yakuza, escaped criminals, et al), but when appearing in the context of a PG-rated film becomes highly susceptible to messy booby traps, banana peels, and precocious youngsters who know karate.

In the 1990s, it was popular to add these characters to Dom Com movies to pad the script with villains for a Home Alone-inspired climax. (John Hughes, who wrote the script for Home Alone and a few of the other examples on this page, loved this trope.) Just to drive home the point of them being totally superfluous to the point of the movie, they are totally absent from most trailers and summaries of the film - only existing for some B-plot slapstick gags to add an extra 20 minutes on to what would otherwise be only 1 hour of screentime. Obviously a subtrope of Ineffectual Sympathetic Villain.

Keep in mind that this trope is not "Villains who are not very evil." This trope concerns villains who are willing to commit heinous crimes, but are simply incapable of doing so because of their incompetence.