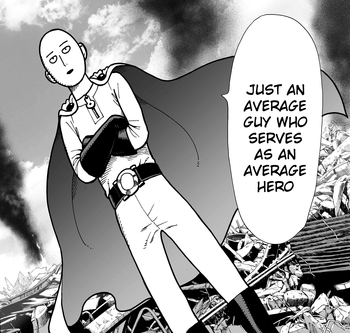 Well, maybe not totally average.
"If I wanted all the glory... I wouldn't wear a mask."
— Spider-Man, The Spectacular Spider Man
Advertisement:

These are special kinds of heroes who just don’t care about their great power or the fact that they're world-famous adventurers, or the idols of millions, and so on. Despite the great power they possess, they always defer to their friends or allies, and rarely want to take the spotlight, even when their friends encourage them to do so. This isn't caused by low self-esteem nor by guilt. The characters honestly and truly don’t think of themselves as any better than anyone else, despite the great deeds they've done, or the inspiration they've become. In fact, such praise usually just embarrasses them.

Heroes of this type will often have their hands full with individuals who are Easily Impressed, and will often come to the aid of such a person and spend the rest of the episode trying to get them out of their hair or increase their self-esteem. The catchphrase for this sort of hero is "I was just doing my job" or "It was what anybody would have done" or "I'm Not a Hero, I'm...". They're also likely to point out who they think are The Real Heroes, or when told "you did it", respond "No, we did it." Humble heroes aren't too fond of flattery or grand gestures, and the simplest gesture is often the most valuable. They may not even protest a rank demotion, being too humble to care about rank at all.

This type of hero is often a result of Upbringing Makes the Hero especially if such a hero to have Muggle Foster Parents and be Happily Adopted. If a hero isn't this at first but becomes one later, it may be the result of a powerful instance of Break the Haughty. Going towards an even darker route, a villain who has undergone a Heel Realization and a Heel–Face Turn usually feels the need to make up for the wrong they've done thereby becoming The Atoner, where they become a more humble person as a result of knowing the price of pride and arrogance.

One of the traits of an Ideal Hero. Tends to overlap with the All-Loving Hero as humility is usually one of these characters’ defining character traits and the Magnetic Hero as it's their humility to endears them into the hearts of everyone around them. Also usually a character trait of The Paragon as this type of hero wishes to set the example that power rests in the hands of everyone. This is often common in Nice Guys as well (particularly those with simplistic lifestyles or have little need for luxuries).

This is often a main characteristic of the Messianic Archetype and The Cape. See also Heroic Self-Deprecation, where the hero acts humble because he thinks he's a loser. Can turn into Martyr Without a Cause when taken to ridiculous extremes. Contrasts with It's All About Me, the Smug Super, and the Glory Seeker. If Beauty Equals Goodness, then expect the World's Most Beautiful Woman to also be the height of humility. They may be paired with a more arrogant rival and form an Insecure Protagonist, Arrogant Antagonist duo.