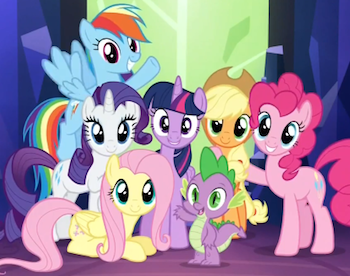 The Mane Six. These are our heroines. From trying to get along at a slumber party to defeating Physical Gods of darkness and chaos, these girls overcome just about any obstacle with the Magic of their Friendship. They're cute. They're awesome. They're the embodiment of the Elements of Harmony.

Oh, and Spike and Starlight Glimmer are here too.

For the tropes that set apart their human counterparts of Equestria Girls from the pony characters, see the entries on the series' protagonist characters subpage.