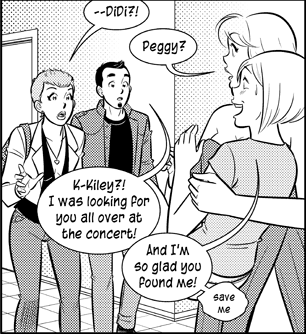 What kept going through his mind were Wonse's last words, as he shook the secretary's limp hand. He wondered if anyone else had heard them. Unlikely ... they'd been a shape rather than a sound. Wonse had simply moved his lips around them while staring fixedly at the assassin's moon-tanned face.
Help. Me.
The assassin shivered. Why him? As far as he could see there was only one kind of help he was qualified to give, and very few people ever asked for it for themselves.
— Terry Pratchett, Guards! Guards!
Advertisement:

One or more characters encounter someone else, who is in company or seems to be busy. Everything seems to be normal, or at least the person encountered seems to be calm or in control. But then, somewhere along the line, the person encountered communicates very quietly — a whisper or a murmur, perhaps just a gesture or a passed note. Their message is short but clear; just "Help Me" or "Save Me", or something on those lines. (In really extreme cases, "Kill Me" is possible.) Then they continue acting as before.

This can be a moment of violent Mood Whiplash, as a situation which seemed comfortable or unremarkable is suddenly shown in a completely different light. The person making the plea is evidently desperate or terrified, probably being watched by a hostile third party, and may be taking a risk just by asking for help. In the worst case, the person making the plea is actually physically injured and maybe close to collapse; they may pass out a few seconds later, triggering a race for medical help or even a tragic death scene. They may even fall over in a way that reveals a previously unseen knife in their back or other serious wound. And even if they aren't hurt yet, they do need that help; if they don't get it, because they were too subtle or the recipient was too dumb, well, Poor Communication Kills.

Very often, though, the trope is Played for Laughs; the person making the plea is out of their depth and desperate, but maybe not in serious physical danger — perhaps they've just made a comedy screw-up which they can't confess too openly, or they're just trapped in conversation with someone terribly boring, but can't get away without seeming rude. The humor may lie in the bizarre methods they try to use to alert others to their predicament, or the other characters being insanely Oblivious to Hints and looking right through their increasingly blatant attempts at hidden communication.

Organised heroes will have a Covert Distress Code to make this more reliable. Alternatively, it may turn out that Everyone Knows Morse when this trope comes into play. An Out-of-Character Alert may achieve a similar or related result. This trope sometimes overlaps with Stealth Insult, when a person held captive insults their captors in a way they can't figure out in order to signal to potential rescuers that they're being held against their will.