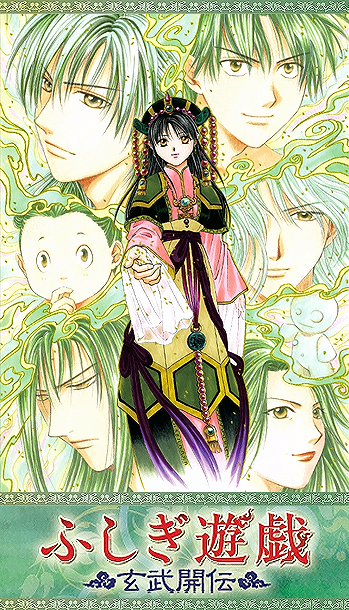 Welcome to the Legend that started them all.
Fushigi Yuugi: Genbu Kaiden (ふしぎ遊戯 玄武開伝, Mysterious Play: Genbu's Opening Legend) is the first prequel written by Yuu Watase to the popular manga/anime series Fushigi Yuugi. The series was serialized from 2003 to 2013 (though it went on hiatus from 2008 to 2010) in a total of 12 volumes. Soon spinned into 5 volumes of Drama CDs depicting the first 5 volumes of the manga, and a Visual Novel—Fushigi Yuugi Genbu Kaiden Gaiden ~Kagami no Miko~ for PlayStation 2, PSP, and Nintendo DS, marking the first ever video game adaption for a Yuu Watase work.
Advertisement:

In the year of 1923, roughly 60-70 years before Miaka and Yui encountered the book and around ten years before a girl named Suzuno did so too, novelist Einosuke Okuda came back to Japan from China obtaining the original Chinese version of an ancient ceremonial scripture called The Universe of the Four Gods (Shi Jin Ten Chi Sho) where he worked tirelessly translating them into Japanese and bind them into book form. Neglecting his ill wife Yoshie and stressed daughter Takiko Okuda, who recently moved from Tokyo to Yoshie's hometown for her mom's further care, has to put up with a new school life, and being constantly teased by her classmates for having a sick mother.

Onto the moment when Yoshie actually died, the father and daughter went into a quarrel that led to Einosuke having an I Have No Son! spit out towards Takiko. Grieved of loneliness, and uselessness, Takiko took the translated book from her father and was going to rip it apart until the book suddenly starts to shine bright and absorbs her into the book, becoming the legendary Priestess of Genbu.

The seven Celestial Warriors' backstories and point-of-views play an important part in the storytelling of this work. According to Watase, compared to the previous work, the viewpoints are more evenly distributed around the interactions between teammates as to just the heroine's character/love development POV. Therefore you might notice some surprising tropes that can only be found in the character sheet.

The ending chapter was published in Flower Magazine's Spring Issue in February 14th, 2013, and the final volume in May 17th, 2013. This marked the end of the story spanning 10 years of publishing. Starting August 28th, 2017, 4 years after Genbu Kaiden, Watase kicked-off her final part of her Fushigi Yuugi saga—Fushigi Yuugi: Byakko Senki; which continues the time setting directly after the end of Genbu Kaiden's story event.

Advertisement:
Late Arrival Spoiler Warning: Unmarked spoilers will be present, for those who haven't read the story, please self-advise. This author is known for her rather harsh manipulative tendencies towards her characters, so for your sake of sanity, we strongly recommend you to NOT flip those spoiler blanks unless you have a heart strong enough to hold everything in.

This story presents the examples of: