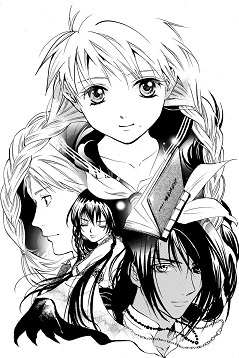 The curious tale of the Byakko
Suzaku's Miko, Miaka
Seiryuu's Miko, Yui
Genbu's Miko, Takiko...
And now, a new "Mysterious Play" will begin on this page!
—Yuu Watase, about the series. note (Said in a cover for Byakko Ibun, actually.)
Advertisement:

A prequel to Fushigi Yuugi and a sequel to Fushigi Yuugi: Genbu Kaiden, it tells the story of the Priestess of Byakko, Suzuno Osugi. A girl from the pre-World War II Japan and the daughter of Takao Osugi, who once worked and studied under the tutelage of Einosuke Okuda (Takiko "Genbu no Miko" Okuda's father), Suzuno finds herself in the land of Sairou after she's thrown into The Universe of the Four Gods. From then on she will have to play a similar role to the one Takiko played before her, and later Miaka and Yui will fulfill—become the Miko, reuniting her Seishi, summon the God that protects the country she serves, and make the wishes that the land needs. . .

Advertisement:
NOTE: Byakko Senki started its run in August 2017. It's best to bring all the tropes related to it here. There will be SPOILERS, logically.

This story presents the examples of: