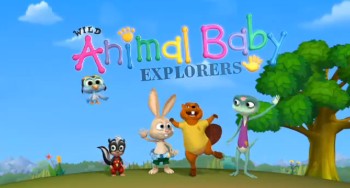 "If we look all around, who knows what we might see? Come join our team!"
Advertisement:

Wild Animal Baby Explorers is a series once aired weekdays on many PBS stations and also available on home video. The series aims to teach very young audiences about animals and nature through a group of young animals that explore the world around them. The series blends mediums by using CGI animation for the main animation, Adobe Flash for the characters' Imagine Spots and actual footage of nature from the archives of National Wildlife Foundation as the characters get out into nature and explore. The series is based on an early property, a magazine called Wild Animal Baby and was preceded by an earlier home video property also called simply Wild Animal Baby featuring mostly the same characters, but without Sammy the Skunk.

The series was presented in widescreen HD where available. The complete series is now available on a 4-DVD set under the title The Lovable Learning World of Animals.