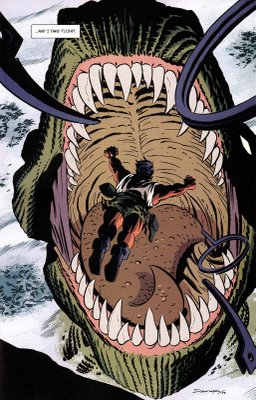 I close my eyes... and I take flight.note look very closely at those grey things in the foreground if you don't get what's going on here.
"If I'm done for, then I'm gonna go out like a badass!"
— A random survivor, Highschool of the Dead note He fails to kill or even scratch any of the zombies who proceed to tear him to shreds.
Advertisement:

To put it simply, when a character dies in a grand way. Though the plot may say that they have to die, the writer honors the character enough to not take them down like a nameless mook, but instead make their death something to be proud of. They don't run, they don't cry. They die standing, and they go down swinging.

The polar opposite of Dropped a Bridge on Him, the Dying Moment of Awesome is a Super-Trope for:

If done well, this can be a real Tear Jerker. It can be undermined somewhat if the character later gets better, but eh, what'cha gonna do...

Someone may note that it was a Great Way to Go. Out with a Bang is a rather more undignified way to die, but still enviable and cool in its own way.

Beware while reading this page. This article has been proven to cause Manly Tears in many tropers. Including female ones.

If an example fits in one of the subtropes, please list it there instead.

One man, one missile, one death to save a world.

One man, one missile, one death to save a world.