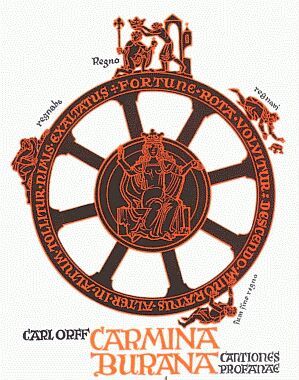 Scenic cantata composed by Carl Orff between 1935 and 1936, based on a collection of medieval poems. Notably they had been put to music before but in Orff's time nobody could read medieval music notation. This

is the original, or at least interpreted, medieval notation. Now we can and suffice it to say, the original melodies are rather different from what Orff came up with. The piece lasts about an hour and has serious moments, goofy moments, and more than its share that are pure Narm. The lyrics cover all aspects of medieval life from sex, to drinking to the plight of sentient, talking roasted swans. If you've ever heard them and think that they don't sound a bit like a gambling garden party, you're right. As an unfortunate footnote, it remains the most famous piece of music to emerge from Nazi Germany.

It's the money part, "O Fortuna", that people remember, due to it being one of the the most famous examples of Ominous Latin Chanting as well as one of the most overused trailer songs in history, a Standard Snippet for whenever we want to suggest an Epic Movie. It's also a fine example of Canis Latinicus; not only is it in Medieval Latin, which differs greatly from the classical language, but it's also sung with what can best be described as a French accent, stressing the last syllables of each word. In proper Latin, the stress on each word is generally placed on the penultimate syllable, but that doesn't fit well into the music.

Carmina Burana can be used for a little bit of musical snobbery, distinguishing the people who recognize the work for what it isnote "O Fortuna" is basically a college student complaining about how life isn't fair, and probably lamenting a loss at the gambling table from those who only know it as the music from The Omen (1976) (or Excalibur, or Die Hard 2) or indeed from the Old Spice TV advert for aftershave.note  - This ran for forever at least on British TV. Less well-known, more pastoral themes from later in the Burana have also been used to sell bread, potatoes and butter on British TV