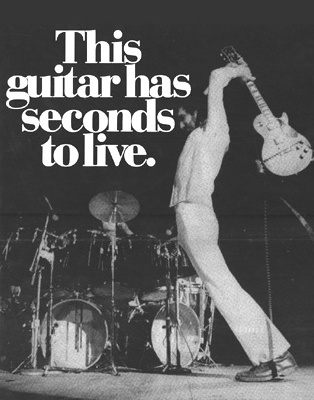 Sometimes, gods of rock demand sacrifice.
How much did you pay for the chunk of his guitar
The one he ruthlessly smashed at the end of the show?
And how much will he pay for a brand new guitar
One which he'll ruthlessly smash at the end of another show?
And how long will the workers keep building him new ones?
As long as their soda cans are red, white, and blue ones
— Cake, "Rock and Roll Lifestyle"
Advertisement:

Rock stars often get so into the hardness of their music that they actually destroy instruments. This most often takes the form of smashing a guitar (hence the trope name) on the stage as hard as possible, pounding it to fragments with a few whacks. Some rock bands set their instruments on fire. And these aren't fictional works trying to make rock seem bad. This is Truth in Television. So much so that it has its own page on the other wiki

Now this might seem like a waste of a perfectly good instrument, and sometimes it is, but smashing a guitar is much harder than you'd expect from seeing this trope in fiction. Many a young guitarist has gotten frustrated with his instrument in the middle of a show and decided to smash it, only to find out that his instrument is Made of Iron (or plywood). When the instrument destruction is more planned and theatrical, bands will often rig the instrument to smash apart easily in order to please the audience. Or a musician will deliberately buy cheap junk instruments so he can smash them. There have been a number of incidents where a guitar company repaired a shattered instrument. And at least one country-rock star was challenged in a letter from a little boy too poor to buy his own guitar, saying "If you don't want it, why not give it away?" That musician has done so ever since.

Compare Great Balls of Fire!, Can-Crushing Cranium, Dramatic Shattering. At times they can push it further with Trash the Set as well.

Despite the name, this is not limited to guitars or to rock music.