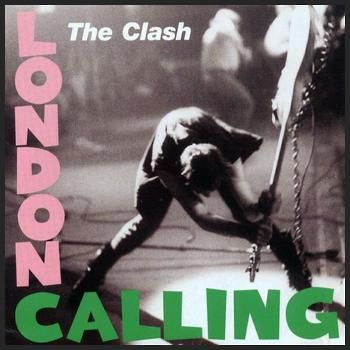 "London calling, at the top of the dial/And after all this, won't you give me a smile?"
Advertisement:

London Calling is the third studio album by The Clash, released in late 1979. It is arguably their most popular and most critically acclaimed album, and it established the band as one of the most diverse and talented Post-Punk artists in the world. The songs drew from styles as diverse as Jazz, Ska, and Rockabilly, the latter of which led to the font of the album cover to be similar to Elvis Presley's debut.

The band began to take the recording sessions pretty seriously, and would spend long hours in the studio working on each track. Motivated to remain true to a Punk Rock aesthetic while branching out toward newer styles, Joe Strummer and Mick Jones drew from more personal accounts and dynamic musicality rather than the signature protest songs with which they had been associated. While maintaining solid political stances in songs such as "London Calling" and "Spanish Bombs", the band spoke out against consumerism and homogeneity in songs such as "Death or Glory" and "Clampdown". London Calling both codified the trajectory of The '70s Punk movement and also displayed the genre's mainstream accessibility.

The result effectively demonstrated The Clash's ability to evolve rapidly and successfully. London Calling is the subject of the book ''Route 19 Revisited: The Clash and the Making of'' London Calling

by Marcus Gray, who exhaustively compiled interviews and information about the record in order to provide a new appreciation for The Clash and its work.

open/close all folders
The original 1979 double-LP

London is troping and I, I live by the river!: