Film / The Night of the Hunter 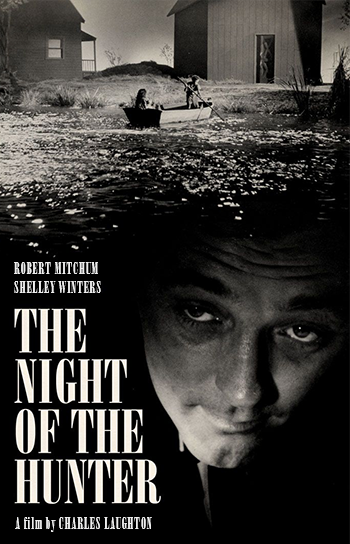 "Leaning, leaning, safe and secure from all alarms. Leaning, leaning, leaning on the everlasting arms."
"Ah, little lad, you're starin' at my fingers. Would you like me to tell you the little story of Right Hand-Left Hand - the story of good and evil?...H-A-T-E! It was with this left hand that old brother Cain struck the blow that laid his brother low...L-O-V-E...The right hand, friends! The hand of love...These fingers, dear hearts, is always a-warrin' and a-tuggin', one against the other."
— "Preacher" Harry Powell
Advertisement:

Probably Robert Mitchum's best and most iconic performance, and definitely his creepiest (save, possibly, for Cape Fear), came in this suspense-horror film from 1955. This is the one where he has "Love" and "Hate" tattooed across his knuckles.

The setting is rural West Virginia during The Great Depression. Mitchum plays Harry Powell, a charismatic, mentally disturbed itinerant preacher and serial murderer who one day gets married to Willa Harper (Shelley Winters), a newly widowed mother of two. Willa's previous husband Ben (Peter Graves) has just been hanged for robbing a bank and killing two men in the process, and Powell — who'd learned about the robbery while in prison with Ben — is hoping to get his hands on the hidden money. And then it gets really messed-up. Lillian Gish, a huge star in the silent movie days who mostly did character roles after talkies came in, stars as Rachel, the Cool Old Lady who defends the children from Powell.

Based on a novel of the same name by Davis Grubb, the film is one of the all-time classics of American cinema and Charles Laughton's sole film as a director. Also the inspiration for the Thirty Seconds to Mars song of the same name.