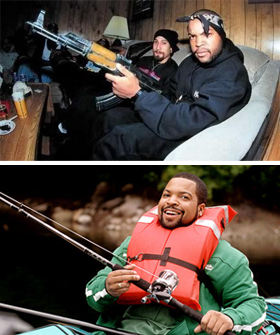 Water safety? Now that's gangsta.
I believe in this, and it's been tested by research
That he who fucks nuns, will later join the church
— The Clash, "Death or Glory"
Advertisement:

There is a trend of entertainers developing Lighter and Softer material after they reach the "mainstream," when their original stuff was much more... well, R-rated.

This is more obvious with rappers, who usually begin as anti-establishment and cynical musicians, and, as they go to Hollywood after they manage to get a hit out in the public's ears, begin to make more presentable appearances, going from "baggy pants and wifebeater" to "sport jacket and unbuttoned shirt" to "three piece suit." The only thing that doesn't change is the bling, it seems.

And it's not just the wardrobe that changes. A Saturday Night Live guest spot today, presenting an MTV Video Awards tomorrow, a little "Sesame Street" Cred, and before you know, they'll have a Reality Show about raising their kids.

The reasons for that are several. Either the entertainer actually changes their worldview after being exposed to a lifestyle until then unthinkable, they want to try something new (like acting!), the Moral Guardians excessively bashed the songs their kids insisted on listening to, or perhaps their pockets were lighter than they thought. But, the most common reason is having children—the entertainer doesn't want their kids to think of them as nothing more than the guy who shouted obscenities on TV, or they now feel how other parents felt about having their kids exposed to such obscenities.

Compare Tom Hanks Syndrome. Related to Badass Decay, Lighter and Softer, Kinder and Cleaner (if the rapper cuts down on their language use), Scary Musician, Harmless Music and Bleached Underpants (when a work distances itself from its NSFW beginnings). So My Kids Can Watch happens when a performer does family-friendly fare with every intention of going back to business as usual afterwards.