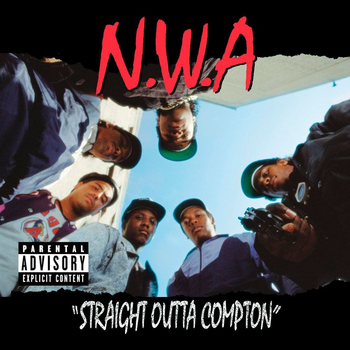 "You are now about to witness the strength of street knowledge."
It's definitely the best rap record I've ever heard. Of course, I can see why people might be offended by the lyrics. But as a human being and not as a public figure, I'm not offended at all. I realise from reading interviews with people like Ice Cube, when they explain that they're not talking about women in general but about particular women they know, it makes a lot of sense. I think the sound of the record is brilliant. I really like hardcore hip-hop and reggae stuff, so it's right up my flight of stairs.
— Sinéad O'Connor, quoted from an interview in Rolling Stone, November 15, 1990.
Advertisement:
N.W.A is the most influential act of the last thirty years — bigger than Nirvana, Madonna or The Sex Pistols. Nothing has ever been the same since they came. I remember I was in L.A. when I was a kid, and I brought "Straight Outta Compton" back to New York. More people were coming over to my house to listen to N.W.A. than were going across the street to the crack house. I had the real shit. It was kind of like the British Invasion for black people.
— Chris Rock, who placed "Straight Outta Compton" on nr. 1 in his personal list of Top 25 Hip-Hop Albums, published in Rolling Stone, 2006.

For the N.W.A biopic named after this album, click here.

Straight Outta Compton is a 1988 Hip-Hop album and the debut of N.W.A, a group consisting of four rappers who would later have successful solo careers: Eazy-E, MC Ren, Dr. Dre and Ice Cube. The record is best known for controversial songs like "Fuck Tha Police", "Gangsta Gangsta", "Express Yourself", "Dopeman" and "A Bitch Is A Bitch". Despite urban legend, Straight Outta Compton was not the first album to be given the "Parental Advisory: Explicit Lyrics" label, though post-1990 copies were given the sticker.note  2 Live Crew's Banned in the U.S.A. was the very first to receive it in 1990

Aw, shit, that pinche internet wiki is at it again. I wonder who it fucked up today?
* SCREECH*
YOU, MOTHERFUCKER!