Music / Mr. B The Gentleman Rhymer 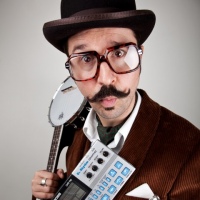 "Straight out of Surrey, a gentleman rhymer named Mr. B,
Friendly with chaps with an air of mystery,
Were I poised to be sad, I've got some more shag,
Squeeze it out the pipe and declare it is a voice brag."
"Straight Out of Surrey"
Advertisement:

Mr. B The Gentleman Rhymer (real name Jim Burke) is a parodist who is one of the pioneers of Chap Hop — Hip-Hop delivered in a Received Pronunciation accent. Mr. B raps, or "rhymes", about high society, pipe smoking and cricket while playing the banjolelenote  a hybrid instrument with a banjo style body and ukulele style neck. His appearance is that of a dapper chap from the 1920's, complete with period mustache and pipe. He has become quite popular in the Steampunk community with his parody of N.W.A's Straight Outta Compton called "Straight Out Of Surrey