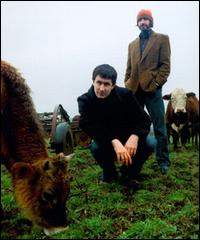 An indie rock band based in Durham, North Carolina, and consisting in the main of John Darnielle and his guitar. From 1991 to 2002 the band was notable for its lo-fi recording style, many songs being recorded by Darnielle at home on a department-store boom box, although since Tallahassee he has made more use of proper studio equipment and a wider range of instruments, resulting in something of a Broken Base.

Mountain Goats songs are particularly remarkable for Darnielle's narrative, highly literary lyrical style. Many songs form part of a series, such as the "Songs for..." and "Going to..." series, or make up part of a broader narrative, such as the 'Alpha' cycle. Albums are often built around a single theme, such as The Life of the World to Come's obvious Biblical motif.

You can vote for the best songs here

They and Their Work Provide Examples of These Tropes: