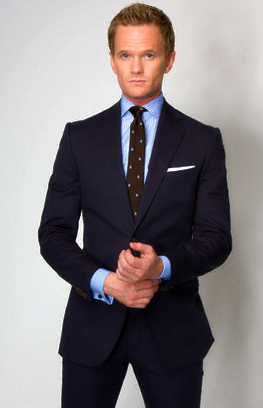 Suit up!
"Clean shirt, new shoes,
And I don't know where I am goin' to.
Silk suit, black tie,
I don't need a reason why.
They come a-runnin' just as fast as they can,
'Cause every girl's crazy 'bout a sharp-dressed man."
— ZZ Top, "Sharp Dressed Man"
Advertisement:

"Clothes make the man" is this guy's motto. Impeccably groomed yet never a slave to fashion, the Sharp-Dressed Man is quite simply a guy dressed to the nines, over whom the ladies in the audience will undoubtedly swoon.

A three-piece suit (that is, one including a Waistcoat of Style) is the usual embodiment of this trope, but both simpler ensembles (like a well-tailored two-piece) or more imaginative outfits can qualify as well. Hats, canes, umbrellas, pocket watches, handkerchiefs, and cigars are optional… but in some environments, highly recommended. Awesome Anachronistic Apparel will often overlap. A Sharp-Dressed Man often pairs his well-tailored clothing with a Billionaire Wristband.