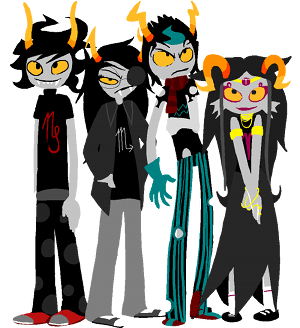 The main protagonists, but not as you know them.
Advertisement:

Don't Name It is a Homestuck Fan Adventure by CalamityCons, aka Calamity Jane. Like Red Dead Virgo, the series is an Alternate Universe where all the trolls have different blood colors.

The story begins focused on Red Vriska, on the morning of her sixth Wriggling Day — and the day where she is supposed to begin playing a game coded by her yellow-blooded friend. While Kanaya wants her to be the first one in, Vriska is wary — she's seen these sort of cliches before. Doesn't help that these annoying humans keep pestering her, insisting she must ensure she enters the game before anyone else...

Meanwhile, Teal Eridan learns he needs to be at his hive (or at least the remains of it) before anyone can enter the game. Maroon Gamzee starts having visions out of nowhere, which appears to be his game-related power — so why did it kick in before he even entered? And Magenta Aradia awakens and learns that the game will give her the chance to have the adventures she always dreamed of...

Can be read at the following places:

Has officially been discontinued by the author.