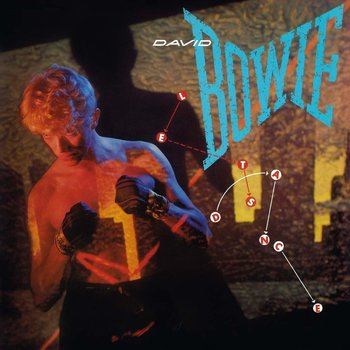 Let's sway, while colour lights up your face
Let's sway; sway through the crowd to an empty space
"The Main Event: David Bowie."
—Tagline from the album's advertising campaign.
Advertisement:

Let's Dance is the fifteenth studio album recorded by English rock musician David Bowie. It was released through EMI America Records on 14 April 1983.

Having finally broken ties with RCA Records after worsening Creative Differences throughout the late '70s, and having spent several years wrangling with a costly and lopsided severance agreement with his ex-manager, Bowie was determined to have a big, moneymaking hit with his first release for his new label, EMI America. With this in mind, he enlisted Chic guitarist Nile Rodgers as producer and came up with his most mainstream album to date, a collection of radio-friendly pop rock tunes rooted strongly in post-disco (though not without Bowie's traditionally dark lyrical undercurrents).

Released at a time when Black post-disco artists like Michael Jackson and Prince were breaking back through to white audiences in the US (after a lengthy shunning of Black music there in the wake of the 1979 Disco Sucks! movement), the album was even more successful than he planned. "Modern Love" and the title track were international Top 5 hits (with the latter being his only single to top both the UK Singles chart and the Billboard Hot 100) and the follow-up Serious Moonlight Tour of '83 a sell-out worldwide. The album itself topped the charts in the UK, Australia, Canada, the Netherlands, France, Japan, Norway, and Sweden, peaked at No. 4 on the Billboard 200, and went on to become the second-best-selling album of 1983 in the UK and Canada. It was later certified quintuple-platinum in Canada, platinum in the UK, the US, France, the Netherlands, and New Zealand, and gold in Finland and Spain.

This unprecedentedly high success caused a Newbie Boom, and to this day, Let's Dance remains Bowie's highest-selling album ever released, selling over 10.7 million copies around the world over the decades. As a testament to its commercial popularity, the 1999 remastered CD alone was certified silver by the British Phonographic Industry. The album was later nominated for Album of the Year at the 1984 Grammy Awards, only to lose out to Michael Jackson's Thriller.

Men wait for tropes, while thousands are still asleep: