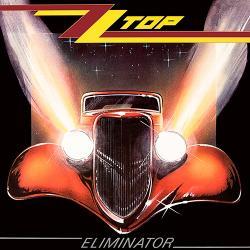 Gimme all your lovin', all your hugs and kisses too...
Advertisement:

Eliminator is ZZ Top's eighth album, released on March 23, 1983. Probably the Texan band's most famous and critically acclaimed album, it sees the trio further expand on the synthesizer sounds from their previous release. 1981's El Loco.

Production started a year before release, in 1982 - inside Frank Beard's house in Houston, before Gibbons headed to Memphis, Tennessee to complete the work. Linden Hudson, the producer that lived alongside Beard in his house, had drawn the band's attention towards synthesizers and drum machines, to the point that Hill and Beard themselves contributed little in the album's final recording.

Eliminator sold over 10 million copies, and its success can also be attributed to multiple music videos that received heavy rotation on television.