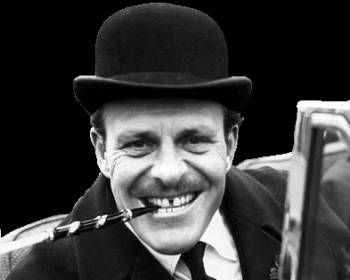 "A page about me? I say! Jolly good show!"
"Do not always assume the other fellow has intelligence equal to yours. He may have more."
Advertisement:

He became known to a worldwide audience through his many films during the 1950s and '60s. He often portrayed disreputable members of the British upper classes, especially cads, toffs and bounders, using his distinctive voice; his costume and props tended to include a bowler, waistcoat and cigarette holder. He was also well known for the large gap between his front teeth.