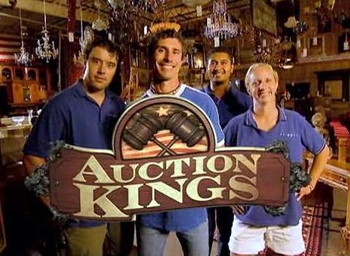 From left to right: Jon, Paul, Delfino, Cindy.
Auction Kings is a reality TV show from the Discovery Channel which began airing in 2010. It follows the auction house Gallery 63 and several of its employees through a week of collecting strange pieces and then selling them at the end of the episode. Think of Pawn Stars, but in an auction house. The cast includes:
Advertisement:

You bought it! invoked