Fanfic / A Gem in the Rough 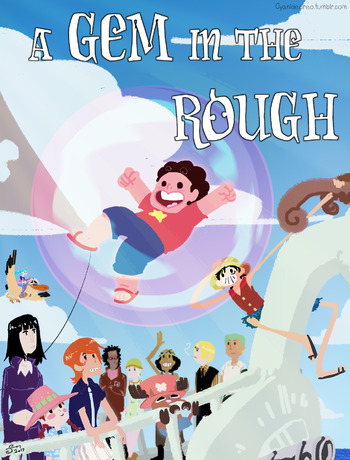 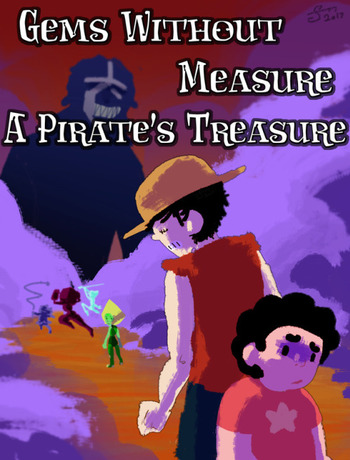 The odds are against us. This won't be easy but we're not going to do it alone.note Counterclockwise from top to bottom: Spandam, Amethyst, Garnet, Pearl, Peridot, Monkey D. Luffy, and Steven Universe.
Advertisement:
"I'm going on an awesome pirate adventure!"
— Steven Universe

After discovering an ancient Gem weapon in the Strawberry Battlefield, Steven Universe finds himself separated from the Crystal Gems and ends up in the most unlikeliest of places: the boat of the "Mr. 5 Pair" of the deadly Baroque Works organization. Now Steven must try to reactivate the weapon and return home from the Grand Line...but not before enjoying an adventure that will change his life forever!

A Gem in the Rough is a crossover fanfic between One Piece and Steven Universe by Drillmaster with additional story ideas by jmr46718 and Cyanide Oreo. It can be found on both AO3

. It currently has one sequel, Gems Without Measure; A Pirate's Treasure (which is also found at AO3

), with at least four more planned...unfortunately, the author has claimed the story is on hiatus for the time being (although he does wish to return to writing eventually). This hiatus ended in the summer of 2020 with one final chapter before the author announced that the story is dead as of February 4th, 2022.

The story has its own Tumblr devoted to it, which can be found here

, and Cyanide Oreo's official art can be found at here

A Gem in the Rough and Gems Without Measure; A Pirate's Treasure contains the following tropes: