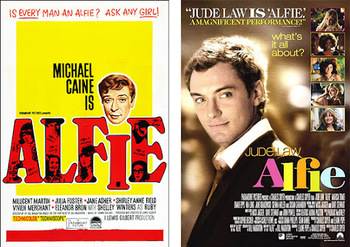 "What's it all about, Alfie?"
Advertisement:

Alfie is a 1966 British romantic comedy-drama film directed by Lewis Gilbert, starring Michael Caine in the title role. It is an adaptation by Bill Naughton of his own novel and play of the same name. The film was released by Paramount Pictures.

A remake of the film sporting the same title was released in 2004, starring Jude Law as the title character. The movie was written, directed and produced by Charles Shyer and, again, released by Paramount Pictures.

Both incarnations of the film follow the life of the title character, Alfie Elkins, for a few years, documenting events that lead to his emotional growth, starting with the birth of his child. Alfie, however, is unable to get together with the mother of his son, who moves on herself. Left unable to see his son, he seeks out emotional aid, leading to a series of misadventures as things derail further and he attempts to recover his life.

In 1970 Bill Naughton wrote a sequel novel, Alfie Darling, which five years later got its own film adaptation directed by Ken Hughes and starring Alan Price as Alfie. However, that film felt more like a remake than a sequel, what with Alfie being played by a younger man and whatnot, and is nowhere near as highly regarded as the original film.

Not related to the NSFW webcomic of the same name. Not related at all.