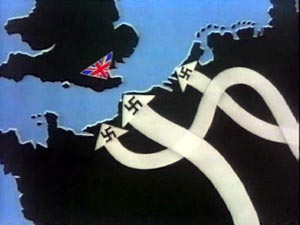 Dad's Army was an ensemble sitcom on The BBC about the Walmington-on-Sea Home Guard platoon in World War II, a motley band of mostly elderly volunteers who would have been their fictional town's first line of defence had Nazi Germany invaded. The show aired for nine years (1968-77), though the war itself had of course only lasted six, and today remains among the most beloved of all BritComs over half a century after it debuted. Almost every character was finely and consistently drawn and had a catchphrase that most British people can still repeat with very little memory-searching.

While waiting for the presumed invasion, the platoon does its best to prepare, resulting in many hilarious mishaps. They occasionally do some 'genuine' military work, such as guarding downed German pilots, and take part in training exercises with the regular army, where they are often surprisingly successful. The rest of the time they merely have to cope with the peculiar tense tedium involved in staying on alert for an invasion that never actually comes, as an essentially past-it, incompetent, yet brave and (mostly) willing rabble with occasionally clashing temperaments. They also have a vigorous rivalry with the neighbouring Eastgate platoon and with their obstreperous local Chief Air Raid Warden, who sometimes tries to sabotage the platoon.

Other significant characters were the rather effete local vicar, Timothy Farthing (Frank Williams), whose church hall the platoon made use of; the pompous verger Maurice Yeatman (Edward Sinclair), who tended to act as Hodges' fawning lackey; Mrs Pike (Janet Davies), Pike's neurotic and overbearing mother who was heavily implied to be having an affair with Wilson; Private Sponge (Colin Bean), another member of the platoon who would often be called upon whenever a supporting role was needed; Mrs Fox (Pamela Cundell), an overbearing local lady "of a certain age" with a bit of a thing for Corporal Jones; and Captain Square (Geoffrey Lumsden), the commanding officer of the nearby Eastgate platoon with a rivalry towards Mainwaring.

Much humour was derived from Mainwaring's resentment of Wilson. Even though Mainwaring was in charge, both at work and in the Home Guard, Wilson was from a much higher social stratum and eventually inherited a title. His effortless charm and dignity utterly infuriated Mainwaring, the archetypal "pompous little man". The interplay between the two characters was always beautifully worked and the series is often held up as an example of near-perfect character comedy, enhanced by the acting talents of Arthur Lowe (Mainwaring) and John Le Mesurier (Wilson). Lowe has merely to bristle his moustache to render the audience helpless with laughter; Le Mesurier was hired because (in the words of a member of the production team) "He suffers so beautifully."

The show, whilst at all times remaining funny, also had more serious plots and pathos, like the way the platoon react when they find out that Private Godfrey was a conscientious objector in World War I. Although they were duly contrite upon discovering that Godfrey in fact served valorously on the Western Front as a volunteer stretcher-bearer, they realised that, irrespective of Godfrey's wartime activities, their behaviour had been reprehensible.

The show did not have an arc, but it did have continuity. During the first season, the platoon's equipment gradually improved as the regular army provided them with surplus gear. Over the series, Jones had a romance which culminated with a marriage in the final episode.

Came fourth in Britains Best Sitcom. A feature film remake was released in February 2016 starring Toby Jones as Captain Mainwaring and Bill Nighy as Sgt. Wilson. We're Doomed, a Docudrama about the behind-the-scenes making of the show, aired in December 2015.

As of its 50th Anniversary in 2018, the show is still being Re Run every Saturday evening on BBC Two, as well as being seen regularly on Gold.