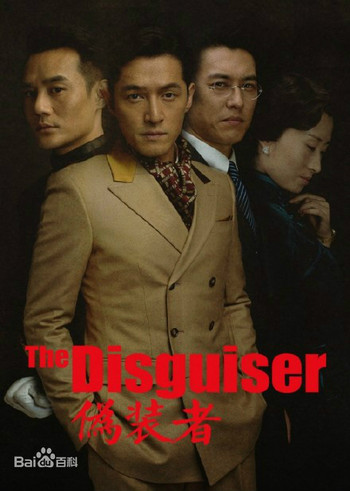 The Disguiser (Chinese: 伪装者; pinyin: Wěi Zhuāng Zhě) is a 2015 Chinese republican spy drama based on the novel Spy War on Shanghai Bond (諜戰上海灘) by Zhang Yong, starring Hu Ge, Jin Dong, Liu Mintao, and Wang Kai. Set in 1940s Shanghai, the series tells the tale of the Ming family and their actions as spies for the anti-Japanese movement as they work to help end the Japanese occupation of China.

On his way to enroll in Hong Kong University, spoiled rich kid Ming Tai, the youngest of the four Ming siblings, is kidnapped by Nationalist government (Kuomingtang/KMT) intelligence leader Wang Tianfeng and taken to a military camp where he is trained to be a KMT agent before being given the code name Scorpion and sent back to Shanghai to lead a team of spies.

Meanwhile, back at home, Ming Tai's oldest brother, Ming Lou, has joined the Japanese-supported New Government as a high-ranking official with Ming Cheng (Ah-Cheng) at his side acting as his assistant, and the oldest Ming sibling, Ming Jing, is secretly using her position as the chairman of the Ming family company to support the Chinese Communist party.

The four of them, not all of whom are aware of each others' full identities and allegiances even as they live in the same house, use their skills and resources to work against the Japanese and the New Government, undertaking various James Bond-esque exploits as they try to free China and bring about an end to the war.

The show, with 48 episodes can be watched on Viki