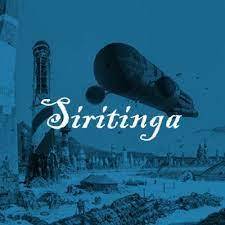 Cuando Juan Y Tula Fueron A Siritinga (Lit. When Juan And Tula Went To Siritinga) is a Spanish radio series mixing elements of science fiction, fantasy, adventure and far too much Lampshade Hanging and Geek humor and Shout Outs to take itself too seriously.

The story follows Juan from Olarcos, a dowser with the body of a child from the Eastern Empire located in the Gemini constellation brought to the desert planet of Siritinga along with Tula, a jackal-woman from Salaquarim who shares a mind bond with Juan and is pretty much his protector.

Siritinga is a desert planet located in the middle of two galactic empires: The Eastern Empire and the Western Empire. Most of their inhabitants live in the Great Gorge of Siritinga, a crescent-shaped opening told to have been created when the dragon Flamynbaar got burned by Tingar, the blue sun of Siritinga and maintained by the mole-like Viborx. Siritinga is ruled by El-Jormaz from Saralham, a powerful warrior brought to bring order after a bloody conflict between the local chieftains creating the disruption of the then-ruling organization of The Three-Port Council.

El-Jormaz is the one who has called Juan and Tula, since mysterious quakes and water scarcity may disrupt the delicate balance and bring ruin to Siritinga.

Meanwhile, the male narrator, who seems to start narrating with funny or overdramatic voices tends to get easily distracted by the sassy and snarky comments of the female narrator, making hilariously hard to continue the story. Will they manage to be in check before the God of Radio Serials leave them without a job?

This series includes example of: