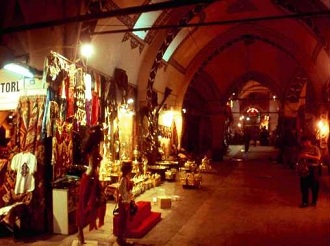 A city populated mainly by merchants, or known for its shopping opportunities. Tends to be a port or somewhere financially strategic. Usually has a Black Market and/or a Bazaar of the Bizarre. You can buy the best available items there, or at least have the most variety to choose from.

This is often, but not always the capital or Hub City.

On many occasions it will be the hometown of a Proud Merchant Race, and will be the favorite hangout of the Intrepid Merchant. Some are even ruled by Merchant Princes.

open/close all folders
Fanworks! The best fanfic on the Internet!!
Fiiiiilm! Get yer film here!
Literature, for free, and that's cutting me own throat!

Live-Action Television, you'll never find a better one anywhere else!
Tabletop Games, wouldn't you like some?
Video Games! You want 'em, we got 'em!
Webcomics! I got yer webcomics right here!
Real Life! While supplies last.