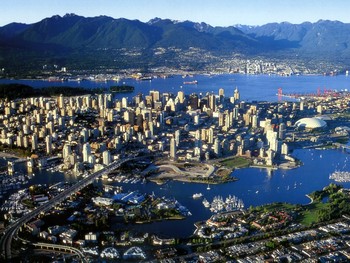 "Oh and by the way, the sanitation worker almost convinced me he wasn't Canadian until he said the words "the sewer floods oot." Nice try, Dudley."
— The Spoony One on

Vancouver is a city in British Columbia, Canada with over 600,000 people, rising to over 2 million when you count the metropolitan area, which is officially called Metro Vancouver and nicknamed the "Lower Mainland". Vancouver is on the lower part of the BC mainland, which can reach as far as Abbotsford

and the Fraser Valley (around the Fraser River). Very popular among Chinese, Indians and British. It has a fairly extensive elevated train network called the SkyTrain, which moonlights as a subway in the downtown area. The twin peaks north of town called The Lions are a prominent landmark, and also lend their name to the iconic Lions Gate Bridge, built in 1938, which connects downtown to the North Shore (and of course, it's also the namesake of Lionsgate Films). Also quite well known for its rain

, leading to the use of 'Raincouver' by residents as a semi-affectionate nickname.

Although it is the biggest city in British Columbia (and the largest metropolitan area in western Canada), it's not the capital of the province. The capital city is Victoria, which is situated, confusingly enough, on Vancouver Island. It's usually just called "The Island" by locals. Ferries run between the Island and the mainland every day, so travel between the two cities is very common.

Vancouver has become the third-largest film production centre in North America, being called "Hollywood North" because of it. This has led to the increased presence of the Pacific Northwest, particularly Seattle (for which Vancouver often doubles), in American media, leading to the term "Seacouver" to describe the vaguely northwestern-ish setting of works filmed in Vancouver, but just as possibly set south of the border in the United States. Among the works shot in Vancouver are all three shows in the Stargate-verse, hence the original trope name "Stargate City". Tony Zhou, a Vancouver native and creator of Every Frame a Painting, did an episode titled "Vancouver Never Plays Itself"

about how the city is so often disguised as somewhere else in film and television. The Global Television Network, while headquartered in Toronto, based its' national news centre in town upon their acquisition of the city (and indeed the province)'s dominant TV station, CHAN-8 (better known as BCTV); their evening News Hour is still the most-watched news in the area. BCTV had been doing national news for their sister stations under WIC Television ownership for most of the 1990s, after an effort to do a national newscast for BCTV's then-network CTV failed. The station had always been at odds with the network and especially with CFTO-9 of Toronto and their owners over the sway CFTO held over the network; combined with Global parent company CanWest buying the WIC assets, this boiled over into a Disaster Dominoes situation in September of 2001 that saw every private station in town switching affiliations.

Nintendo of Canada and EA Canada are also there, just a few miles across the border from Nintendo's U.S. headquarters in greater Seattle. A large number of other gaming studios are located in Vancouver, including Capcom Vancouver, Rockstar Vancouver, Radical Entertainment, United Front Games, Slant Six Games, and Sega's Relic Entertainment, to name only a few.

Vancouver hosted the 2010 Winter Olympics. This came after hosting Expo '86 (the 1986 World's Fair), a minor transportation themed exposition; the Expo featured the opening of Vancouver's light-rail transit system, the SkyTrain; as of 2006, the SkyTrain held the record for the longest fully-automated rapid-transit system in the world.

Vancouver and the metropolitan area is home to diverse ethnicities, mainly coming from East and Southeast Asia. There is a large population of Chinese, Japanese, Koreans, Indians, and Filipinos here. It is also been stated to be the most "American" city in Canada, due to the large number of American visitors as well as American expatriates.

A list of Vancouver's 'famous faces' would probably go on for pages; among others, James Doohan, Carrie-Anne Moss, Michael J. Fox, Ryan Reynolds and Michael Bublé have all called the city 'home' at one point or another.

Shows filmed (but not set) predominantly in Vancouver:

Vancouver in fiction (when it's not playing another city)