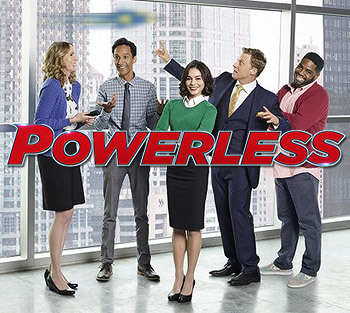 Powerless is a Work Com television series aired on NBC for one season in 2017. Set in the world of DC Comics, it follows the adventures of Emily Locke as Director of Research & Development at Wayne Security, a subsidiary of Wayne Enterprises, that specializes in products for ordinary humans who are poised to be victims of the battles between superheroes and supervillains. Vanessa Hudgens, Alan Tudyk, and Danny Pudi lead its ensemble cast.

Not to be confused with Powerless, a limited series published by Marvel Comics. Compare to Damage Control.