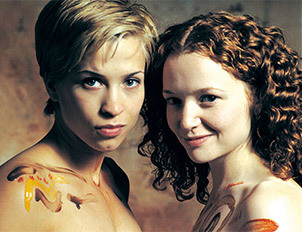 Better Than Chocolate is a 1999 Canadian romantic comedy/ slice of life movie. It centers around Maggie, a 19-year old college dropout and lesbian who's just found her true love, an artist named Kim. And then her mother calls and says that she's getting divorced from her husband and that she and Maggie's brother Paul are going to come stay with Maggie. And Maggie's not out to her mother. Combined with that, the adult bookstore where Maggie works is being hassled by the authorities, who have confiscated a shipment of "obscene" books at the border, and proprietor Frances and trans woman Judy are both attracted to each other but too timid to do anything about it. It all comes to a head in a protest put on by Maggie which takes some rather unexpected turns.

Better Than Chocolate includes examples of: