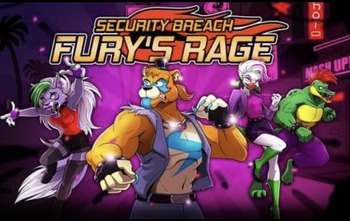 Are you ready to kick ass as Freddy?
Advertisement:

Security Breach: Fury's Rage (Not Furry's Rage) is a Spin-Off of the Five Nights at Freddy's series. It was developed by Scott Cawthon, as a sort of apology for fans for the continued postponing of Five Nights At Freddy's: Security Breach. It features artwork by Claudia Schröder and music by Leon Riskin, the former of which was also involved in the creation of Freddy in Space 2, another spin-off game of the Five Nights at Freddy's -franchise. The game was released on April 28, 2021 on Game Jolt