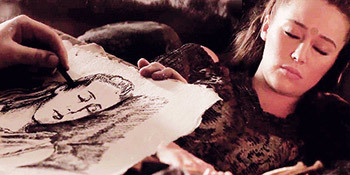 Clarke sketching Lexa during a moment of peace
Sara: Can I ask you something? Did you love her? Or is it an illusion—this feeling of intimacy in your work? Are you really this insightful...this tender...or just a gifted mirror?
Katchoo: It's not my place to say.
— Strangers in Paradise
Advertisement:

The creation of art between two people can reveal a lot about their feelings towards one another. The subject of a work is baring themselves to another literally and figuratively; they are allowing themselves to be seen and studied in an intimate fashion without resistance. The artist in turn is taking in everything that is being offered, expressing their own feelings and desires through creating a representation of their focus.

The scenes are often one of intimacy and personal connection, or can be used to indicate the absence of intimacy if it is handled as clinically detached. If the feelings between the two are one-sided the scene can highlight their different approaches to the situation. Might be a step on the way to a Relationship Upgrade if the characters realize their feelings during the situation, or the catalyst for the break in their current relationship. Can often serve as a metaphorical love scene.

The art creation does not necessarily need to be shown directly, but can be conveyed through the artist or subject reviewing the work afterwards or talking about it and what it represented. Sometimes instead of being about the connection between the artist and the subject, it is about the connection between multiple subjects, or the multiple artists working together.

Related to Significant Sketchbook, which covers one character discovering that another has such a collection of art. Might qualify as The Reveal if the feelings were previously hidden from the audience, or Once More, with Clarity! if the scene was originally shown without conveying the intimacy and is revisited later. May be why characters think Artists Are Attractive.