Film / Not Another Teen Movie 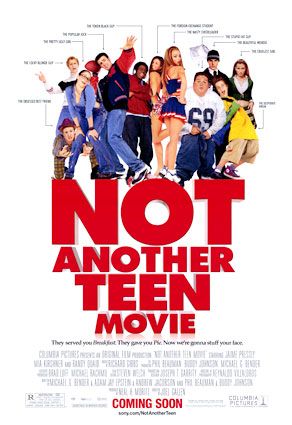 "If you liked Scary Movie, who gives a shit?!"
"You also put the "brat" in "bratwurst". And the "eww" in "jiu-jitsu". And the "ism" in "This is all just a defense mechanism"!"
Advertisement:

Not Another Teen Movie is a 2001 Affectionate Parody striving to do to High School movies what Scary Movie did for horror. It shared some of the same creators, none of whom were Seltzer and Friedberg, instead they're specifically Phil Beauman and Buddy Johnson.

The basic plot was taken from She's All That, but it also parodied American Pie, Can't Hardly Wait, The Breakfast Club and dozens of others. Including a parody of the Heath Ledger singing scene from 10 Things I Hate About You that leads to the Pretty Ugly Girl being tasered.

Notably, this was the film debut of Chris Evans.