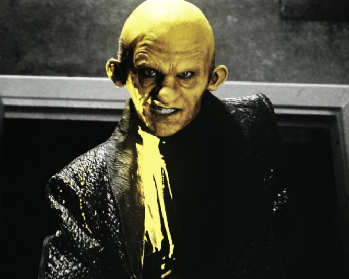 No, he isn't a Rubber-Forehead Alien from a sci-fi flick. He's from a Deliberately Monochrome crime-thriller.
It would be the most incredible superhero movie
the world has ever seen!
The screens will light up!
With real explosions
And special effects!
Tons and tons of special effects!
My super sweet cape would be special effects!
And it will blow your mind!
— Robin, My Superhero Movie, Teen Titans Go! To the Movies
Advertisement:

In live action sci-fi or fantasy works, special effects are a must. In the past, they were also very difficult to use and expensive so it was rare that you would see any major special effects in dramas or comedies.

Modern filmmaking being what it is, these effects are easier to come by. Because of this, works in genres other than science fiction and fantasy may contain computer generated imagery and other formerly complex special effects for cinematic purposes. These effects might be present for dream sequences, to emphasize the mood, for comedic effect, or simply because it looks really cool. Newer filmmakers are using these techniques in works that don't technically need them in order to bring their stories to life.