Series / House of Cards (US) 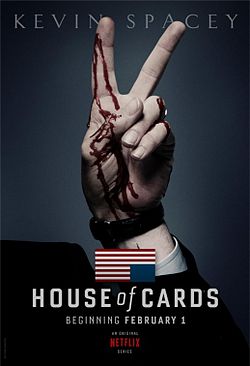 House of Cards is the U.S. remake of the UK series of the same name. Developed and produced by Beau Willimon and premiered on February 2013, it marks the first step in Netflix's next stage of original programming.

After a successful election campaign, the Democratic Party is swept back into The White House, with significant help from House Majority Whip Francis "Frank" Underwood (Kevin Spacey). However, though the President-Elect Garrett Walker (Michel Gill) had promised to appoint Underwood as Secretary of State during the campaign, he reneges, obstensibly needing Underwood more as party whip in the House of Representatives.

Insulted at the duplicity, and upset that he failed to even see the betrayal coming, Frank privately forswears any loyalty to the president or the party. Aided by a host of allies, including his wife Claire (Robin Wright); his Chief of Staff Doug Stamper (Michael Kelly); young Intrepid Reporter Zoe Barnes (Kate Mara); and a host of other unwitting pawns, Frank begins a chess game of immense political importance. Taking revenge on those who wronged him, Underwood also positions himself to grab more power than he had ever previously planned.

The show ended after Season 6, following Kevin Spacey's sexual predation accusations, with Netflix exploring several spinoff ideas. Production of the show was suspended until further notice on October 31, 2017, only a day after Netflix announced the show's ending. Spacey was officially fired on November 3, 2017, with Netflix shortening the season to 8 episodes and resuming production with Robin Wright as the lead.

Compare and contrast with HBO's Veep, which also centers on the seamy underbelly of the U.S. government in modern times and the people who will do anything to get political power, though Veep is more darkly comic than House of Cards (and the hiatus that happened to Veep near its final season was for medical reasonsnote Julia Louis-Dreyfus was getting treated for breast cancer, not because of sexual harassment and behind-the-scenes turmoil in trying to fix it).

You build your tropes, they aren't handed to you: