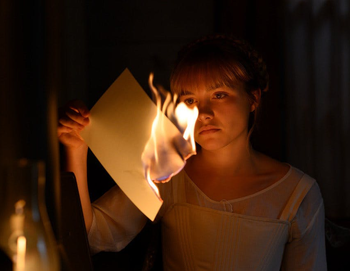 ♪ FIIIIIIRE! ♪
Michelangelo: By the way, Mom, [y]ou're looking good tonight.
Tang Shen: Thank you, sweetie, but I'd rather not keep something Shredder offered. You can help me burn it later.
Michelangelo: Sweet!
— Same Difference, "Earthquakes, Portals, and Worms, Oh My! Part 3"
Advertisement:

You've got some important paperwork to get rid of, and the paper shredder is not working. Or, well...it's just not symbolic enough, really. Because this paper is Very Special to you. Get the kerosene and the matches. It's time to build a fire.

Not just any fire, either. This is almost always a special Hollywood fire that knows exactly what parts of the documents that you're burning that are the most important to you. Be it a loved one's face, your own face, an important phone number, whatever — the Hollywood fire will make sure that's the last thing that burns, as the camera closes in for a nice lingering shot of the consuming flames. How the fire knows to do this is a mystery, but it is always so.

A variation on this with the paperwork is to mark up or disfigure the important picture instead of burning it. But that's sort of for wusses. We recommend you go with the bonfire.

Compare to It's All Junk, Let the Past Burn. A Viking Funeral is this trope with someone's corpse.

, who was said to have been the first person since the Red Scare of 1919 to be convicted of criminal anarchy. Supposedly for saying those three words.

TV Tropes would also like to apologize to any readers who now have "Disco Inferno" by The Trammps stuck in their heads and inform those that didn't that they now do.

Not to be confused with Kill It with Fire.

Rachel has found out that her father is cheating on her mother, so she burns the photograph she has been carrying around since she was a child.

Rachel has found out that her father is cheating on her mother, so she burns the photograph she has been carrying around since she was a child.