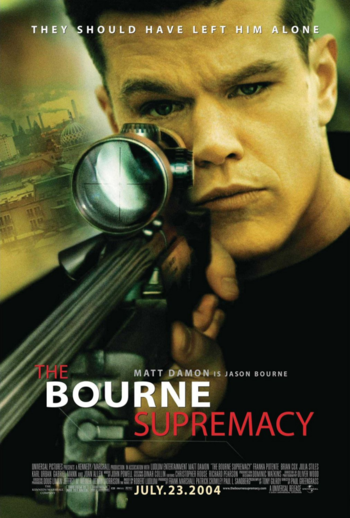 They were warned.
"I told you people to leave us alone. I fell off the grid. I was halfway around the world."
— Jason Bourne
Advertisement:

The Bourne Supremacy is the second movie in The Bourne Series, and the sequel to The Bourne Identity. It was directed by Paul Greengrass and was released on July 23rd, 2004.

After a botched undercover mission, a CIA operations leader finds evidence that Bourne was responsible for killing their agents. He's not, but those who framed him also want to tie up loose ends and send an assassin played by Karl Urban to track him down and kill him. He survived their initial encounter but his beloved Marie was killed in the process.

Angry and wroth with revenge, Bourne comes out of hiding to find the people who killed her and bring them to justice, and to also start making amends for past wrongs. This brings him into direct conflict with the remnants of Treadstone, from Berlin to Moscow.

Followed by The Bourne Ultimatum.