Trapped in a Sinking Car 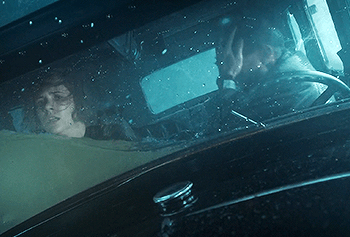 "His beloved car will be his grave."
— Johnson, Transporter 3
Advertisement:

Want to show a character's struggle for survival in a dangerous Drowning Pit situation that is easy to set up? Look no further, simply have the victim trapped in a car shooting off a cliff or bridge straight into a large body of water below. Often preceded by malfunctioning brakes, blown tires, an incapacitated driver or the car being rammed off by another vehicle.

Bonus points if the car goes into a slow-motion fall once in mid-air. For added drama, the seatbelts may jam up or a passenger's limb gets stuck on impact.

Favorite trope for villains who want to get rid of a character who knows too much and needs to be silenced in a non-suspicious way. If executed successfully, the victim might end up never being found.

Truth in Television in the sense that plunging a car into water can be very, very dangerous. The pressure of the water against the door could make it physically impossible to open if the passenger does not open the door immediately. Indeed, the pressure of the water against the window may make it impossible to open via conventional means, whether it's a manual crank or electric. There are two ways out of the situation: Soft Glass (which can be invoked by using a tool meant to shatter tempered glass) or waiting for the pressure differential between the inside and outside to stabilize, which won't happen until the cabin is filled to the brim. Watch MythBusters demonstrating this trope in episode Underwater Car

Subtrope of Death Trap. Sometimes averted in fiction when the car turns into an Amphibious Automobile.

The hero observes a car driving off a road and into a river. He dives in to save the female lead who almost drowns.

The hero observes a car driving off a road and into a river. He dives in to save the female lead who almost drowns.