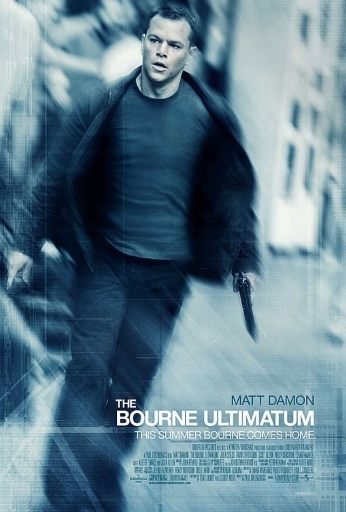 Remember everything. Forgive nothing.
"Someone started all this. And I'm going to find them."
— Jason Bourne
Advertisement:

The Bourne Ultimatum is the third entry in The Bourne Series, and the sequel to The Bourne Supremacy. Directed by Paul Greengrass, the movie was released on August 3rd, 2007.

Picking up where Supremacy left off, Bourne is on another mad chase - this time, it's to pick apart all of the loose ends about his identity and life, as he sets out to track down the source of the Government Conspiracy that made him into a weapon and caused all the trouble in the first place. This leads him through a series of individuals with the information he needs, and he picks up an unexpected ally in the computer specialist who had been in the background of the previous films. Cleverly retcons the second movie's final scene and thus takes place contemporaneously with part of Supremacy.

Followed by a Spin-Off, titled The Bourne Legacy, which doesn't star Matt Damon. The events of that film take place in the exact time as this film. A proper sequel, titled Jason Bourne, set twelve years after this film, was released nine years later, in 2016.