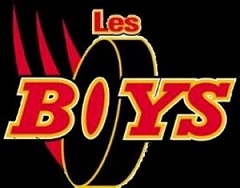 Starting out as a 1997 feature film (followed by three sequels, a prequel, and a TV series), Les Boys depicts the (mis)adventures of an amateur hockey league.

The original movie focused on the players of an amateur hockey team (the titular "Boys"), made up of average Joes, and run by pub owner Stan. Stan's a good guy, with one vice - gambling. After losing a substantial amount ($50,000) to his mobster friend Meo, Stan is desperate, and is considering selling his pub ("Chez Stan"). However, Meo's a (relatively) good guy, and tells Stan that if his Boys can beat Meo's team of thugs, then the debt will be settled. If not, Stan loses the pub. After a series of close calls, Les Boys manage to pull out a win, and Stan keeps the pub.