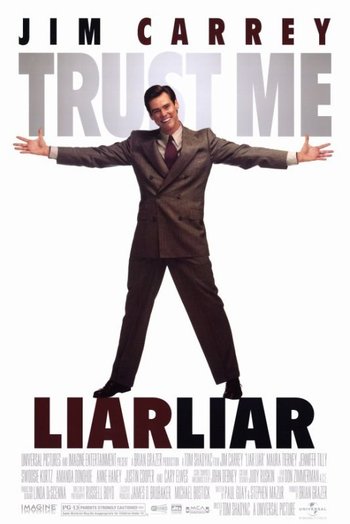 Note the lack of pants on fire and nose shorter than a telephone wire.
Max Reede: My dad? He's... a liar.
Teacher: A liar? I-I'm sure you don't mean a liar...
Max: Well, he wears a suit and goes to court and talks to the judge.
Teacher: Oh, I see! You mean he's a lawyer.
Max: [shrugs]
Advertisement:

Lawyer Fletcher Reede (Carrey) is both career-focused and — as his profession demands — an expert in lying. His son Max (Justin Cooper) gets frustrated at his father always breaking his promises and not spending time with him, the breaking point coming when his father misses his birthday party (his father says he's working; his boss is actually working him). Disillusioned once again, Max wishes while blowing out his cake candles that Fletcher couldn't tell a lie for just one day.

And the wish works. Fletcher is absolutely incapable of any form of dishonesty, no matter how big or small. He can't lie, mislead, withhold information, ask a question if he knows the answer is going to be a lie, or even deceive by remaining silent. He quickly finds just how much he really does lie in one day and how much trouble he gets into because of telling the absolute truth...

...on the day that not only Fletcher has one of the most important cases of his life, with defenses built mostly on lies, but Audrey (Maura Tierney), Fletcher's ex-wife and Max's mom, is interested in moving with her boyfriend Jerry (Cary Elwes) to Boston, and bringing Max along! Hilarity Ensues.

If you're looking for the trope on extremely good liars, which actually used to be named after this movie, see Consummate Liar.

Example of:
The Roast