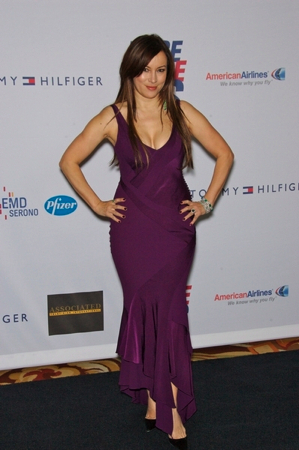 This is about as SFW as images of her get.
Tilly: Start with your Simpsons money, use a little girl voice, and take them for everything they've got! Now, I'm needed on the set of Bride of Chucky 5.
Chucky: Time is money!
Tilly: Money is money!
— The Simpsons ("Gone Abie Gone")
Advertisement:

Jennifer Tilly (born Jennifer Ellen Chan on September 16, 1958 in Harbor City, California) is a Canadian-American actress best known for such movies as Bound (1996), Bride of Chucky, and Liar Liar, as well as being the voice of Bonnie (Joe Swanson's wife who was pregnant until season seven — and yes, that includes the years that the show was canceled) on Family Guy, and being really good at poker.

Earned her sole Academy Award nomination for Bullets over Broadway.

Her sister Meg Tilly is also an actress. They are of Chinese descent on their father's side.